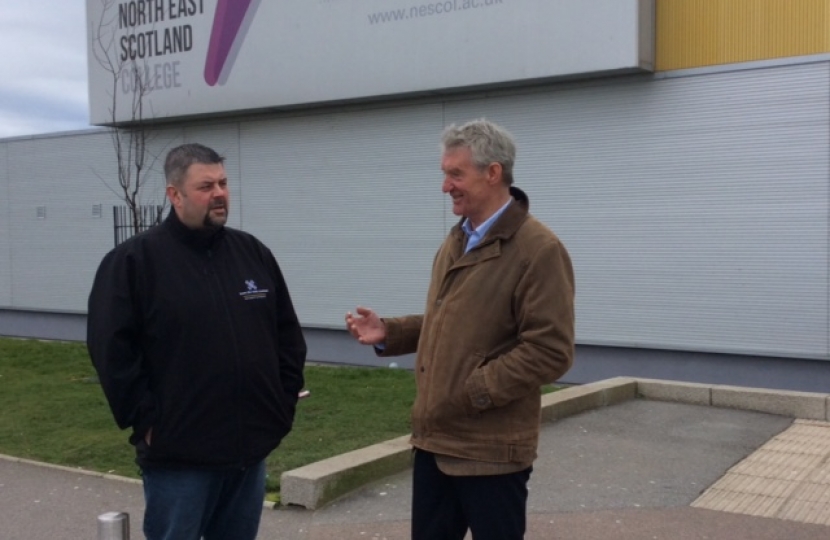 The recent industrial dispute at Scotland’s colleges is a symptom of a wider problem within the education sector in the north-east, the Scottish Conservatives have argued.

More than 150,000 college places have been lost, the number of lecturers has dropped by 1,200 and business leaders are reporting that students are entering the workplace lacking basic skills.

Peter Chapman, Scottish Conservative Holyrood candidate for Banffshire and Buchan Coast, has been joined by north-east businessman Conrad Ritchie in calling for an improvement in standards and emphasising the importance of a strong education system for the local economy.

Both have spoken out following a walkout by staff affiliated with the Educational Institute of Scotland (EIS) union on Thursday (April 17). Management and union leaders have since come to an agreement in the row over national pay bargaining, but the dispute has exposed a wider issue.

Mr Chapman said: “Our colleges are struggling following £60million in cuts from the SNP government in Edinburgh since 2011, which has resulted in the loss of more than 150,000 places and a 1,200 drop in the number of lecturers.

“Education and training for our young people is vital to the future of the north-east economy, but I am becoming increasingly concerned at the sharp decline in basic standards of numeracy and literacy over the past few years.

“Several local businessmen have also raised this issue with me. Young people - unless they are among the top performers - are coming out of secondary school lacking basic skills. It is a huge problem for employers, a massive barrier to these young people having fulfilling and productive lives and a sad indictment on our society.

“The Scottish Conservatives will prioritise training and education for young people. We need to boost productivity in this country and one of the best ways to do that is through skills development for the workforce.”

Local companies have expressed concern at the long-term impact on opportunities for young people in the north east area.

He said: “We have more than 250 apprentices within the Score Group, and we regard this latest dispute as yet another nail in the coffin from the Scottish Government to education provision in the North East.

“Cuts to the college sector are not just impacting upon staff and students at these institutions, but upon the very foundations and future of the regional economy.

“We continue to provide opportunities for our young people, but in the current climate, that is proving very difficult and is not helped by the uncertainty within the college sector."